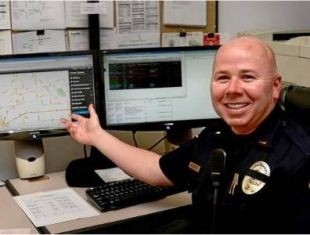 In January 2013, Alhambra was the first law-enforcement agency in Southern California to have citywide implementation of PredPol, a cloud-based software that forecasts areas where crimes are likely to be committed.

Nine months ago, some residents expressed reservations about technology that could target the homeless or minorities, but co-founder Jeffrey Brantingham, a UCLA anthropology professor, said PredPol doesn’t use personal information to predict crime.

“It doesn’t include who the offenders are or what type of music they like or anything like that,” he said. “It’s focusing on where the crimes are happening. The public calls the police and report crime. Police are using data they are given. They’re actually doing what the public wants. It’s nothing like ‘Minority Report’ or criminal profiling.”

PredPol uses five years’ worth of law-breaking data to map a 500-by-500-square-foot area where crime will likely happen.

The technology essentially places officers at the right place and time to prevent lawbreaking.

The Alhambra Police Department focused on the two most common crimes in Alhambra, Yokoyama said. By year’s end, when compared to 2012 numbers, car burglaries decreased by 21 percent, and auto theft declined by 8 percent, a statistics report showed.

Yokoyama said the system works. He recalled a time when police officers were patrolling Valley Boulevard at PredPol’s direction and noticed a suspicious vehicle. They found ski masks inside the vehicles and arrested the individuals on suspicion of robbery, he said.

“The act of robbery, burglary, et cetera does not have to be committed for a crime to occur,” Yokoyama said. “The planning and actions toward committing the crime is a crime in and of itself. In fact, it would always be our preference to stop a crime at this stage than for an act to occur.”

Yokoyama added that giving officers direct, clear missions to patrol particular areas has had a positive effect that residents and business owners have noticed.

“It’s actually increased our communication and visibility to the community because (police officers are) spending more time in the residential area, as an example,” Yokoyama said. “I get (positive) calls all the time about why the police are in their neighborhood more.”

Residents such as William Rising, however, said he hasn’t noticed more officers on the streets. But he said response time to emergency calls has improved.

“Just a more visible police presence can avert many potential criminal activities, such as car theft, break-ins and drug dealing,” he said in a Facebook post.

In addition to printouts of potential crime areas, Yokoyama said every police car is now equipped with in-car computers that receive refreshed information every five minutes.

Yet the crime rate for certain activities has increased. Residential burglaries went up by 17 percent and robberies increased by 22 percent, a report found.

“Although the numbers are up, based on PredPol predictions, we feel a number of crimes were prevented and would have been higher if not for PredPol missions,” Yokoyama said.