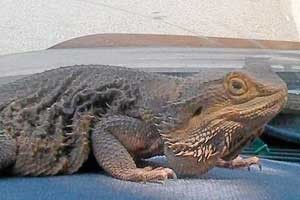 A nightmare for an Alhambra pet owner ended when her stolen bearded dragon was found in Pomona on Monday, June 23rd.

The dragon and its owner, Miranda, were reunited. The suspect isn’t in custody yet.

Police later plan to present a case with the District Attorney’s Office against the alleged lizardnapper.

“We just thank God that she came home,” said Ganga’s owner, Miranda, on Tuesday. She did not want to give her last name. “We were upset, but we’re glad she’s home now.”

When she saw her pet for the first time since boarding the lizard on June 9, Miranda said Ganga’s color was pale and she was malnourished. She said the suspect allegedly burned Ganga’s tail because it was burnt and black.

When she returned to the store on June 14 to pick up Ganga, employees apologized and said her pet had been stolen, Johnson said.

Police reviewed the store’s security video footage and discovered the lizard with the red painted claws had been stolen on June 12. Detectives were able to identify a suspect.

Johnson said an Alhambra man entered the business with another person, walked around the store, took the lizard and walked out.

Store manager Jimmy Guan said an employee was cleaning the dragon’s cage when the man walked in the store. He said the man bought two hamsters.

The employee later noticed the 12-inch lizard was missing.

They suspected the man took Ganga.

“We actually gave police information which led to the recovery,” Guan said. He said they recently installed new cameras at the store.

Detective Michael Montano tracked down the suspect on Monday.

“They found the man they were looking for with the lizard in Pomona,” Johnson said. “He gave us back the lizard.”

Johnson was unsure where in Pomona the lizard, valued at about $200, was found.

Police didn’t release the suspect’s name since he hasn’t been arrested. He faces a misdemeanor theft charge, Johnson said.

Miranda has been buying Ganga’s food at McCormick’s Pet Emporium for about 20 years and was in shock with how the store handled the situation.

“We were on vacation and calling over there to see how she was doing,” Miranda said. “(On June 14) we were in Phoenix and I called to make sure the owner left the door open because we wanted to bring her home that night.”

Miranda said when she called the owner he said, “Oh, I’m sorry, but she got stolen.”

Ganga had been missing for two days.

“I said What? When? When were you going to call us?” Miranda said. The owner told her he meant to call about Ganga’s abduction and was trying to track down the lizard.

She claimed the owner’s back door had a broken lock which led to a room where about eight other pets including rabbits and cats were boarded. Ganga was also stored in that room during the time she was stolen.

“We went to the pet store on Sunday after church and that’s when I saw the door lock was still broken,” Miranda said.

Miranda said she told the owner that pets were also family members and was upset that the door lock had not been fixed. The owner finally fixed the lock on Monday by the time Miranda arrived to pick up Ganga.

“Those few days that we didn’t have her, I called some of my sisters from my church and asked them to pray,” Miranda said. “I said to myself, ‘Lord just bring her home.’”

By Tuesday, Ganga was enjoying her time back at home by spending time underneath her heating lamp, eating and hanging out by her favorite tree in their backyard.

“We’re happy because she’s looking like her old self again,” Miranda said. “We’ll go (to McCormick’s Pet Emporium) and buy her food, but I will not leave her there for boarding again.”