Battle of the Badges in Arcadia raises funds for Special Olympics 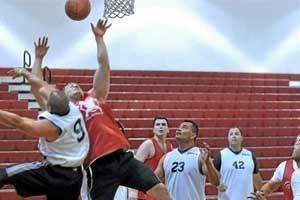 Police officers and firefighters from throughout the San Gabriel Valley met on the basketball court for a charity tournament Saturday May 31st, in which the ultimate winners are the disabled athletes of the Special Olympics.

Voluntary donations collected as entry fees at the 2014 Battle of the Badges will benefit the Special Olympics Southern California, according to organizer and Arcadia police Detective Walter Ashby.

The tournament, now in its fourth annual incarnation, was hosted at Arcadia High School.