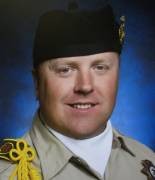 The service is planned to begin at 11 a.m. Thursday Feb. 21 at the San Manuel Amphitheatre, 2575 Glen Helen Parkway.

The procession beforehand, which will include hundreds of law enforcement, fire, and other public safety vehicles, is expected to take more than one hour to arrive at the venue, which may result in traffic delays on Interstate 15 and Interstate 215.

MacKay, who worked in Big Bear and Yucaipa, was a 15-year veteran with the department, Sheriff John McMahon said last week. He was father of a 7-year-old daughter and a 4-month-old son. He was a resident of Redlands.

The MacKay family comes from "the very northern part of Scotland," Jeremiah's father, Alan MacKay, said Tuesday evening after a vigil for his son in pouring rain at Yucaipa Community Park. Hundreds of people turned out in spite of the wet and cold.

"Jeremiah and I were pretty active in our Scottish heritage," Mackay said. "It's just something that's a part of our family. . . . Just about everything he did, he did with full force.

"He had this incredible intensity when he took something on. He did it to his fullest. To give you an idea, Jeremiah, when he was four years old, hiked to the top of San Gorgonio with me, with a backpack on his back. To the top of the highest mountain in Southern California."

"Another firefighter and I wanted to prepare ourselves for a hike in the Sierras, and that was part of the preparation. . . . He wanted to go. I said it's an awful long hike, it's an incredible mountain. He said, 'No, we can do it, Dad.' The only part we carried him was over the glaciers, because all he was wearing was tennis shoes. It just showed me the determination he had, even at such a young age."

MacKay's sister, Angie Reynolds, 32, said she and Jeremiah grew up in Lake Arrowhead and attended Rim of the World High School together.

"I absolutely know he's in Heaven," Reynolds told Redlands-Loma Linda Patch at the end of the vigil Tuesday night. "There's no question in my mind. And I know he's looking down on us, and he's helping us out as much as he can right now."

Jeremiah MacKay was born June 4, 1977, at San Bernardino Community Hospital to parents Alan and Marie Mackay, according to a biography released Wednesday by the Sheriff's Department.

He and his younger sister, Angela Reynolds, were raised in Lake Arrowhead.

"Public service was instilled in Jeremiah from the beginning as his father was an engineer for San Bernardino County Fire and his mother volunteered at her children's schools," the bio states. "He proved his affinity for success at age 4, by becoming the youngest person to climb Mt. San Gorgonio."

In addition to school and organized sports, Jeremiah was involved with a youth group at Church of the Woods in Lake Arrowhead, and he loved to ski.

"His love for mountain recreation led to early employment opportunities," the bio states. "Jeremiah worked as a skiing and snowboarding instructor at the Snow Valley Ski Resort and also worked lake patrol for the Arrowhead Lake Association."

"As a deputy, he was assigned to the Central Detention Center, Twin Peaks and Central stations, and the Sheriff's Training Facility," sheriff's officials said. "He was promoted and served as a detective at Twin Peaks and Big Bear, with his most recent assignment at the Yucaipa Station.

"Jeremiah was very proud of being a deputy sheriff and his dignity manifested itself in his work. He was the recipient of five CHP 10851 awards and three Commander's Awards. He was also chosen for the department Honor Guard and played the bagpipes."

MacKay recently played at the Wagon Wheel Festival in Lake Elsinore in honor of fallen Riverside Officer Ryan Bonaminio, according to the Sheriff's Department.

"More important than any rank or position with the department, Jeremiah was a family man," sheriff's officials said. "He was a husband, a father, a son and a brother.

"Jeremiah proposed to his wife, Lynette, on Thanksgiving Day 2010 and they were married November 19, 2011. He became a step-father to Kaitlyn Denny, now 6, and loved her as his own.

"Jeremiah helped Kaitlyn with her karate techniques and he found great joy in watching her advance in belt levels. In October of 2012, son Cayden James MacKay was born and captured his father's heart."

Family and friends were always a top priority for MacKay. He played bagpipes at his sister Angela's wedding.

His family "enjoyed camping together, going to country music concerts, hanging out with friends and just goofing off. He loved the beach and had an infectious laugh," his bio states.

MacKay was a member of the Inland Empire Emerald Society for six years and he was the current Sergeant at Arms.

MacKay, fatally shot Feb. 12 in a confrontation with Dorner on Seven Oaks Road, was the second law enforcement officer killed in the line of duty during the ex-cop's alleged rampage.

Authorities believe Dorner is accountable for four killings in the space of ten days: a former LAPD captain's daughter and her fiancé in Irvine on Feb. 3, Riverside police Officer Michael Crain on Feb. 7, and MacKay on Feb. 12.

Crain's funeral was Feb. 13 in Riverside and he was laid to rest at Riverside National Cemetery.

Written by Guy McCarthy of the Banning-Beaumont Patch