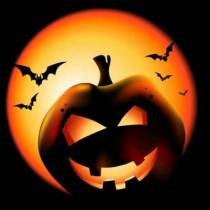 Halloween has been celebrated on October 31st in the United States since the early 1800's and is traditionally a family-oriented holiday when children get to dress up and enjoy candy and other treats.

In order to enjoy this fun-filled holiday as safely as possible, we have provided the following safety tips for children and parents:

Thousands  of years ago Celtic people inhabiting the area that is now England, Ireland and Scotland  celebrated their new year on November 1st. The Celtic religious order known as  the Druids held a great festival each year on the evening before the their new year. This  festival was celebrated in honor of the god, Samhain, the Druid god of death and was known  as All Hallowtide. The Druids believed in the supernatural and tried to placate the Lord  of Death with offerings.

They also believed that on this day, the souls of those who had died during the  previous year began their journey to another world. Druids believed that souls of the dead  returned to their former homes to be entertained by the living. Bonfires were built atop  hills so they might find their way. Suitable food and shelter was provided for these  spirits or else they would cast spells, cause havoc, steal infants, destroy crops, kill  farm animals and create terror as they haunted the living. The spirits demanded placating  by giving them a type of worship and offering. This is the action that  "Trick-or-Treat" emulates today. The community also sacrificed animals and  offered fruits and vegetables so the spirits would keep their distance. The cold and  darkness of winter and the presence of spirits are reasons why Halloween is connected with  images of death and evil.

Christian missionaries in the Sixth Century sought to reform the pagan beliefs of the  Celtic people. They strategically centered all of their holy days around the native  holidays, and named November 1 the Feast of All Saints. This day honored all Christian  saints, known and unknown, and was meant to eventually replace the festival of Samhain.  The day was similarly called All Hallows, in which the word "hallow" means  sanctified, or holy.

The custom of celebrating Halloween was brought to the New World by Gaelic immigrants.  Today's celebration follows ancient customs involving a combination of Druid practices and  other religious beliefs. Jack-O-Lanterns entered  America's Halloween scene with the Irish in the 1840s. Legend states that a blacksmith  named Jack aka "Stingy Jack," made a deal with the Devil. Jack traded his soul  in return for mastery of his trade. Then a saint named Peter came to Jack and offered him  three wishes, hoping that he would choose wisely and save his soul. But Jack used the  three wishes to trick the devil. When Jack died neither God nor the Devil would accept  him. So Jack was left to roam the Earth carrying a hollowed out turnip as a lantern. In  Irish folk lore Jack became known as "Jack of the Lantern" or "Jack-o-Lantern." Jack's turnip was replaced with a pumpkin when the legend  was introduced into American folk lore in the Nineteenth Century.

Today, Halloween has become a multi-million dollar costume business. Generally, on this  children's holiday, children dress up and go from house to house for candy. Harmless  pranks are pulled on neighbors or friends. Many communities are now hosting structured  activities or parties in order to keep pranks from turning into destructive outings.