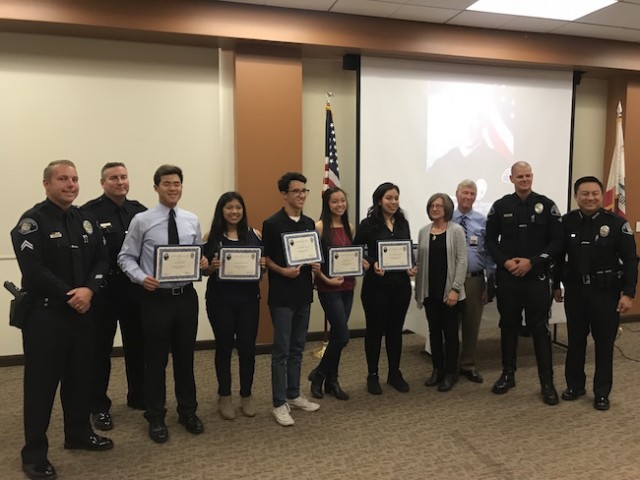 Alhambra POA hosted our fifth annual Ryan Stringer Memorial Scholarship Night on Wednesday, May 23. Out of a record-breaking number of applicants, five high school seniors were selected to each receive a $1,000 scholarship. They were chosen for their essays on what they learned about and from Ryan Stringer’s legacy, as well as why they need a scholarship. We strive to keep Ryan’s memory alive both within the department and community through generations with our scholarship approach and night of remembering him.

The evening began with welcome remarks by Alhambra Police Department Chief Vu. Scholarship Chairperson Corporal Grant Spencer then introduced the scholarship and Ryan’s parents, Debbie and Sonny, to speak about their son and present a slideshow before recognizing the recipients. The five students that we honored were Kenneth Tiet, Valerie Montelon, Alejandro Salazar, Kimberly Pham, and Bliss Tafolla-Aguirre.

This year, we have reached $30,000 given away in Ryan Stringer Memorial Scholarships over the past five years. We are excited to recognize these outstanding individuals and hope that they continue to honor Ryan’s legacy by giving life their all, and being loyal, honest and kind.

About Ryan Stringer:
Ryan Stringer passed away in July 2011 in the line of duty while responding to a possible robbery. Ryan is remembered by his family, friends, department and community for being fearless, persevering, and inspiring others. His fun-loving personality particularly showed when he was skydiving and riding his motorcycle, and his ability to make friends out of strangers. He persevered following a motorcycle accident when he experienced brain damage and still managed to return to work only five months later. Ryan was a role model to many in his community, leading six people to become police officers after his passing and carry on his legacy.

Check out some of the photos below and view all photos in our Facebook album here.